I’ve been travelling to the sources of flamenco during over 20 years, usually heading towards festivals or courses. Thus I have not visited so many of the traditional Spanish flamenco places for tourists – but this February I had a rare chance to visit Barcelona and check out the basic flamenco selection there. The flamenco scene in Barcelona isn’t as broad as in Sevilla or Madrid, when it comes to dance, but there is still quite a lot of flamenco going on in town. I visited three different places to check out the quality of the performances and the atmosphere. 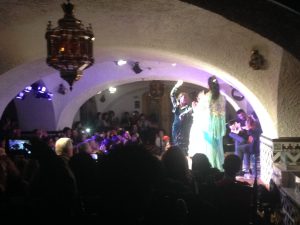 Tablao Cordobés was founded in 1970 and is still the most traditional-bound, classical tablao of Barcelona. They hire visiting artists to perform with the house band for a few weeks at a time. All the artists names are openly told both on the web site and in the program distributed to the audience, which is very good!

During my visit dancers Paloma Fantova, Mónica Iglesias and Hugo López and singer La Fabi were the invited performers of Cordobés. For me Hugo López was the top name – I have already before enjoyed his impressive, fast vuelta quebradas in among other Javier Latorre’s productions and now he convinced me with his broad dynamic scale por tarantos as well as his versatile foot work (not only basic golpe-planta-tacón). Mónica Iglesias did a spirited caña with bata de cola and castanets, though the band didn’t always read her intentions that well. Paloma Fantova danced nicely por alegrias but didn’t make such an impact. La Fabi performed two solo numbers, the granaina being one of the high points, bulerias with a little dancing also worked nicely. The three singers of the house were all good, as well as the guitarists, though their duo rumba was sometimes pretty far out. I was especially glad to see the way especially the first part of the performance was built, nicely building over from one number to each other without so many dull breaks. For example after the martinete in the beginning the singers kept on playing their sticks while the chairs for the next numbers were put in the right places – these kinds of details gives the performance a more polished atmosphere.

The performances in Tablao Cordobés are acoustic, which might be demanding for the performers but was quite enjoyable – the voices and instruments sounded really good and the balance worked. The space is quite small and the biggest shortcomings had to do with service and audience logistics. The prices are the highest in town and the service was the worst during the week. The lobby is practically non-existing so the audience has to queue in the middle of the dark Rambla and wait for their names to be shouted out, then again stand in a line in a narrow staircase and tell their names again and finally got their tight seats… The seats are distributing in the order they are bought so if you want to sit in the first row, get your ticket very early. Do buy your ticket in advance, at the door it is really unpractical. Credit cards are not accepted so bring cash. One drink is included in the ticket price, which in my case meant the show had already begun while waiters were pushing sangria glasses in people’s hands in flash light. Photographing is not allowed until the final fin de fiesta – it is nice to have peace from mobiles during the performance, but the fin de fiesta was then quite lost beyond all those mobiles and devices… The staff attitude wasn’t that charming and it seemed they all presumed that tourists don’t understand anything at all about flamenco. 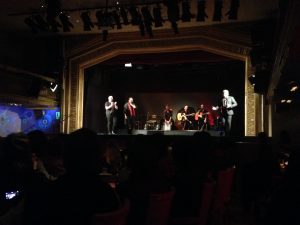 c/ Balmes 139, tickets from 35 € (cheaper if you buy them in advance on the web site) – http://www.palaciodelflamenco.com/

Palacio del Flamenco is located a little north from the centre, but the underground railway (Ferrocarril) stops almost at the door. The space is an elegantly renovated old theatre from the 1920s and already at the door it is clear that these people care about friendly service. The staff is smiling, wishing you warmly welcome and eagerly speaking English, French and many other languages – but they also recognise an aficionado and then address you as a colleague.

The performance programme is quite confusing – every evening there are three performances with different names though quite similar content if I’ve understood it correctly. ”Flamenco y olé”, ”Flamenco Gipsy” and ”Pasión flamenca” sounds quite stereotypical to me. The performance includes the so-called Flamenco Experience in the lobby, which means a short film about the history of flamenco and a little workshop where the audience is taught some palmas and dance steps. The performers in charge have a very charming attitude but aren’t afraid to state things like that one does not clap along in a flamenco performance, thanks for that. The short documentary about flamenco history was a pleasant surprise – the main points were quite well told and the script weren’t afraid of statements like calling the 1950s–1960s a Gypsy dictatorship (!). The film also included a little video cavalcade of legendary flamenco performers from Vicente Escudero to Joaquín Cortés and in the end told that flamenco has now spread all over the world – thus the attitude towards foreigners interest in flamenco was much more open than in many places.

The theatre was nice and spacious, the people having dinner got the places in the front. Usually I’m quite sceptical towards the food served in this kind of places and especially its pricing, but at least what I saw of the food served at the Palacio it looked OK (though the price is high). The performance ticket (quite expensive as well) included one drink and here they didn’t oblige you to have sangria. You could choose your drink all by yourself and it was friendly brought to the table – also those not eating got to sit in nice tables.

The performance itself was of varying quality – very good at its best but sometimes quite confusing. There was a lot of performers involved: three solo dancers, a group of three dancers, two singers, two guitarists, one cajon player and a violin player. The names weren’t told anywhere, I had to ask several questions to find out the soloists names. The older solo bailaora La Candi (63 years old, the staff told me!) was the climax of this performance – tight but gentle, dancing an inspired and musical alegrias, although the band didn’t really follow everything perfectly. The older solo bailaor Antonio el Toleo offered some nice footwork por siguiriyas but I wasn’t that glad about his palmas circus, where he had the audience clapping along according to his instructions. I’d rather seen a dance number well constructed as a whole. The dance group was likeable especially in the first number cantiñas with bata de cola and mantón. In a way it is nice to see that the dances are well practised, though it might generate confusing moments like in the silencio where the dancer just danced the prepared choreography without caring too much about the music (which just went on and on after she had already finished…). It was also somewhat confusing to take the band off stage and perform a paso doble to recorded music with castanets and jumps. The musicians were all good, sometimes the arrangements became somewhat of a mess with two guitars but part of the falsetas were also well-arranged with the violin. The singing many times went off in more entertainment directions besides more traditional letras.

The sounds were all amplified and the sounds were quite poor, also the foot work sound from the stage. The lights were used quite in a restless way – all the time throwing in spotlights and putting the audience lights on, like begging for applauses in the middle of the dance numbers. 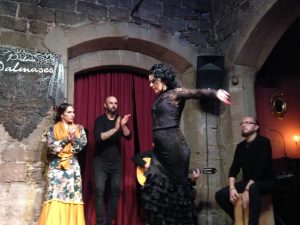 Palau Dalmases is a Baroque-style palace in the old quarter of Born, on a small street almost facing the Picasso Museum. As performance space it has a strong atmosphere – beautiful furniture, paintings, chandeliers and candles, quite a beautiful space to step into. There are usually one performance each night, two during weekends – but during my visit they had suddenly added even more performances so the situation might change suddenly. You can buy your ticket easily via internet but they friendly sold them at the door as well. The space is small and intimate, the seats numbered and distributed in the order they are sold. The ticket price includes a drink freely chosen at the bar – champagne seemed to be the most popular drink here.

The number of performers is smaller here than in the other places but I thought that was only a positive thing – the performance was of high quality and quite lucid and definite. There are several artist names mentioned on the Palau Dalmases web site but I had to ask via email to get the names of the performers that night, so the line-up is changing all the time. The musicians that night were Jorge Mesa Valle ”El Pirata” (vocals), Adán Pérez (guitar) and Isaac Vigueras (cajón), all excellent. Vigueras is quite an experienced guy who has played with all the big names of Barcelona like Miguel Poveda, Chicuelo and Duquende. The guitarist even offered a lyrical and personal solo number and I felt relieved after all those rumbas. The singing solo was an impressive caña and for the first time this week I really felt like shouting some jaleos. Unlike the other performances, this one didn’t enter any entertainment music but stayed strictly with convincing traditional letras.

The dance numbers felt like they very well rehearsed, with a lot of remates together with the cajon. The dancers Lourdes Alcantara and Maria Fuentes (Fuentes in the photo above) were both very good, without any unnecessary and artificial starlike behaviour and begging for applauses. I especially enjoyed the taranto with Alcantara – airy, calm and musical, a harmonic entity. The performance started with an energetic bulerias in fin de fiesta style but then ended a little abrupt without any number together in the end. Among the performances I saw this was the shortest one but the most solid one as well.

The amplification though was definitely a big problem. I suppose the performance could have worked also acoustically – now it was amplified though and with quite an explosive volume that almost hurt. Especially the amplified cajon pretty much ran over everybody else – it would be important to save the audience’s ears and fix that. As it is, I recommend bringing ear plugs.

Tickets: The easiest solution is to buy your tickets in advance via internet, it is extremely easy. All places had a name list waiting at the door so it isn’t even obligatory to print your tickets.

Children: Children are welcome and especially in Palacio del Flamenco my child was treated like a princess. There are discounts for children, with the exception of Tablao Cordobés which kindly promises discount but doesn’t really have any good solutions how to practically arrange that.

Photographing and video: In Palacio del Flamenco and Palau Dalmases it is allowed to take as much photographs and videos as you like, in Tablao Cordobés it is allowed only during the fin de fiesta, the last number.

Set list at my visit, all sets approx. 60 minutes:

Other flamenco tips for Barcelona: